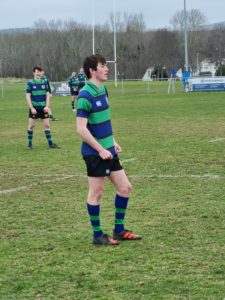 After two away matches (Corinthians and UCD), the Seapoint U-20s were back home on Sunday February 27th for the penultimate league fixture. The ask was pretty clear. A bonus point win to deliver 5 points and set up the grand finale against MU Barnhall next weekend (March 6th). The team duly obliged and ran up a 50 point total against the visitors, however the match was a much closer contest than the score-line would indicate. Galwegians had travelled with only 16 players and were unfortunate to lose a player early in the first half with a possible broken ankle. However, the 15 Galwegians on the pitch could all play, they didn’t lack for effort and physicality and they never stopped trying.

Despite playing with a very strong wind in the first half it took Seapoint some time to find the first score. Guilty of trying to play too much rugby in their own half, they conceded penalties and knock-ons to give the visitors possession and territory. Eventually after about 15 minutes Cronin put boot to ball and followed up with a good chase to put the visitors under pressure. From the ensuing clearance Alex Lee put in a great 50-20 kick to secure a lineout in the opposition 22. A great take at the front of the lineout by Hugh Ross set up a driving maul which went all of 20 meters before Flannery eventually forced his way over for the first score. Brindley missed a difficult conversion. Having found the formula Brindley followed up from the restart with another superb kick deep into the same corner. Another driving maul set up the attacking platform and after a succession of offloads McCoy scored under the posts giving Brindley an easier conversion. 25 minutes into the first half and leading 12 points to nil the team seemed well on their way. Another kick from Alex Lee again into the corner and a very similar play this time resulted in a score for Forster. Brindley converted to open up a 19 point lead.

However complacency at the next kick off showed how dangerous the visitors could be. Seapoint failed to secure the kickoff, the ball was gleefully snaffled by the Galwegian Number 8 who made significant inroads into the 22. Fast recycling and some good handling resulted in a score for the visitors who surely took some confidence to have scored whilst playing into the wind. It was therefore essential that Seapoint scored again before half time. O’Shea won a great turnover penalty after the kickoff. Forster took a quick tap and duly set up a ruck just short of the line. Some more good handling and O’Donavon found his way over with the last play before half time. An easy conversion mean the halftime score was Seapoint leading 26 points to 5.

Whatever hope the visitors had from playing with the wind in the second half was quickly eroded as Seapoint proceeded to play with abandon and score at will. Initially superb feet from Conor McCaul in the middle of the pitch created a line-break for Forster from which he was never going to be stopped. 33 5. From the subsequent kick off Galwegians set up a good scoring opportunity and James Newman was  yellow carded for tackling his opposite number without the ball. Despite the numerical disadvantage, Seapoint were now in full flow and a line break up the touchline by Forster put Alex Lee away to score another. 40 points to 5 after 10 minutes. Shortly afterwards Brindley created a scoring opportunity for Oisin Horan who scored in his first 2 minutes on the pitch. 45 points to 5. At this stage Seapoint emptied the bench and McCaul, Brindley, Forster and Lee all came off. Sean Finn used his switch to Number 8 to display superb speed up the middle (who knew he could move that fast !!!) and then displayed his Gaelic ability by chipping the full back, collecting the ball and diving over to score under the posts. A successful conversion left the score at 52 points to 5. Shortly before full time Thomas O’Shea was yellow carded and Wegians went to the corner, set up a driving maul and scored a late consolation try to leave the final score at 52 points to 10.

All in all a superb team performance. Calum McCoy was exceptional and turned up everywhere. Flannery, Forster and McCaul were dynamic. JP brought physicality when he replaced Reynolds early in the first half. The backs were all good, Brindley pulling the strings and managing the game well. Alex Lee was exceptional throughout and set the team on the winning way with some excellent kicking in the first half. Hard to pick a man of the match but Sean Finn shades it. His usual solid 80 minute performance and he stepped up as captain when Forster came off in the second half. .

We need to hear the Seapoint Roar !!!