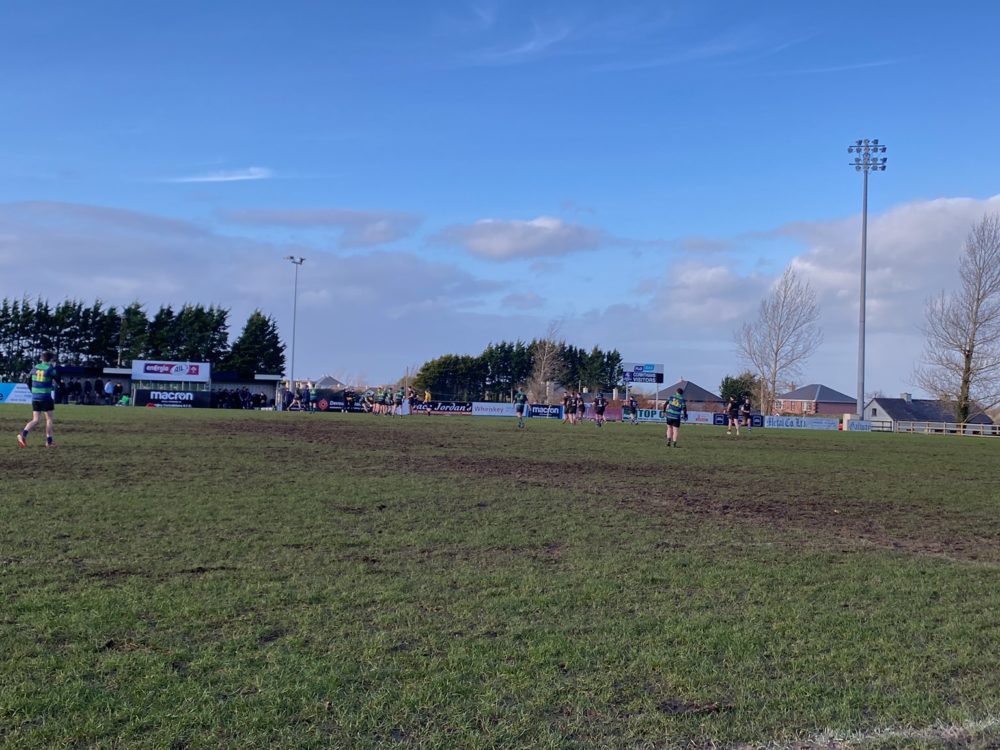 This was always going to be a tough fixture. Corinthians had left Kilbogget disappointed after their previous encounter and were expected to be a tougher proposition at home. This time around, they were worthy winners in a contest that was hard fought and bruising. Seapoint left Galway knowing that their own performance, whilst never lacking in endeavor, was not as sharp or accurate as previous performances. They were very much in the contest for the entire 80 minutes, ultimately the cumulation of individual errors resulted in a loss on the road.

Corinthians had a formidable pack, and played to their strengths, simple rugby, one off runners and hard yards. Playing with the wind in the first half they dominated possession and territory. Pressure yielded successive penalties and Seapoint found themselves defending on their own line. The line held firm and when Corinthians did eventually get over the line they were held up failing to ground the ball. This was the theme for the entire first half. Whenever Seapoint did manage to get out of their own half, simple handling errors gave away possession and they found themselves back defending in their own 22. The defence was excellent, so after 30 minutes it was disappointing to cough up an intercept which the opposing number 12 picked off and gleefully scored under the posts. An easy conversion gave Corinthians a 7 points to nil lead. Seapoint rallied and whilst never looking like scoring they did manage to reach the half way mark without conceding another score. Seapoint supporters who had travelled to Galway were quietly confident the game could be won in the second half.

Not for the first time this season Seapoint had a poor opening 10 minutes to the second period. More individual errors yielded a lineout on the 22 and with what was the best executed back move of the day Corinthians scored an exceptional try in the corner. Their outhalf converted from the touchline into the wind, an exceptional effort. Now trailing by 14 points to nil it was imperative that Seapoint scored next. And they did. Exerting pressure in the opposition half they got a good attacking platform from a lineout. A clean Hugh Ross take and a driving maul resulted in a try for Seamus Flannery. Brindley mised the conversion attempt. After the kick off Brindley used the boot to create more pressure, a fumble by the winger gave Seapoint an attacking scrum. A huge individual effort from Forster got Seapoint their second try under the posts which Brindley duly converted. Now trailing by only 2 points, with 20 minutes left, and with the wind at their backs Seapoint had a real opportunity to win.

However Seapoint failed to use the elements and when a blocked kick resulted in an intercept, the Corinthian winger did an excellent impression of his international clubman Noel Mannion (Cardiff 1989) running half the length of the pitch to score in the corner. This time the Corinthians outhalf failed to convert leaving the score line at 19 point to 12. Seapoint huffed and puffed for the last 10 minutes but Corinthians were not going to be beaten on the day. Seapoint take away a well deserved losing bonus point from the encounter but could easily have had four if their execution and tactics were better on the day.

Full marks for hard work, a lesser team would have been well beaten. Seapoint were full of courage in defense, and never shirked a challenge. The game was lost when Seapoint were in possession with poor decision making and poor execution. Nonetheless, trailing by 2 points with twenty minutes to go, they were a bounce on the ball away from taking a lead and they were always in the contest up to the very end. Next up UCD in Belfield next week, an opportunity to get back to winning ways. All support welcome.