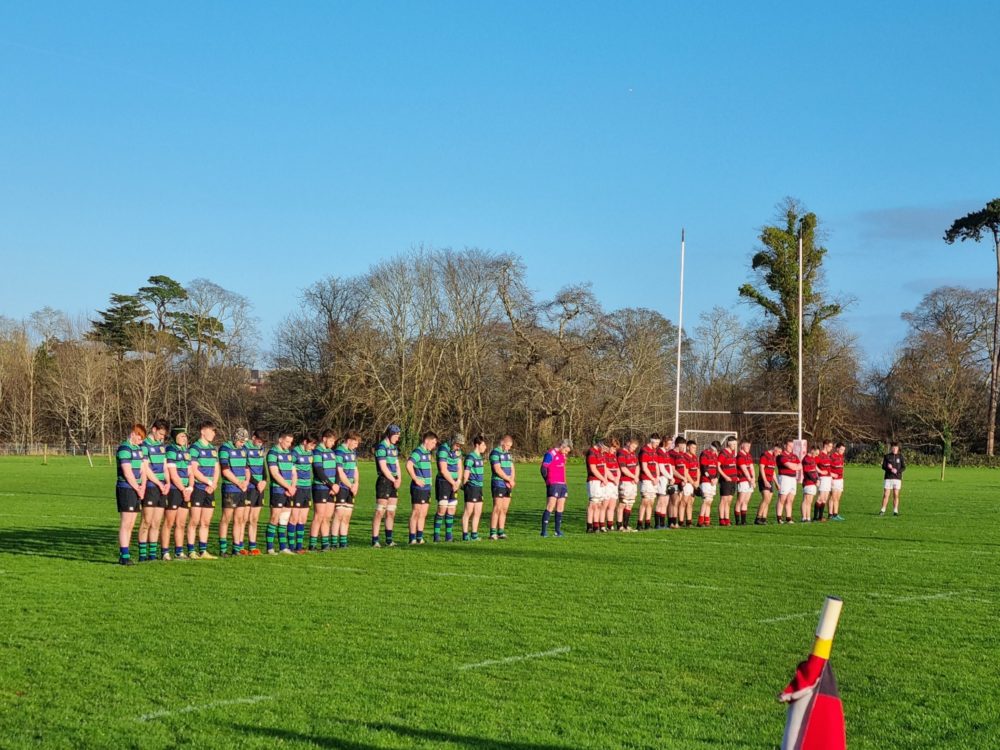 Twenties off to a champagne start to 2022 once uncorked

Whilst sitting top of the table over the break, Seapoint remain conscious that the Barnhall have a game in hand and therefore there is zero margin for error at any stage of this league campaign. Every game is important and every result counts. It was therefore heartening to see the team deliver an all-round impressive performance resulting in a comfortable victory

Seapoint did not start well. Trinity kicked off and Seapoint made a hash of the exit, having two kicks blocked down and putting themselves under pressure. Trinity were the more energetic, and ultimately forced their way over for the opening try after only 3 minutes of play. An easy conversion gave the hosts an early 7 point lead. After the restart Seapoint soon found themselves defending again as Trinity dominated possession and got a lot of reward from direct running close to the breakdown. A huge defensive effort by Sean Downing prevented a second try and won Seapoint a penalty. However once again Seapoint failed to clear their lines and would have been in more trouble except for an exceptionally good kick chase from James Newman.

Trinity completely dominated the first scrum (Seapoint put in) and were lucky not to concede a penalty. This seemed to spark the Seapoint forwards into life. Better focus and more direct running from Forster and Campbell created go forward ball and a platform in the Trinity half. Great feet from winger Horan put Forster into space on the 22 and he was never going to be stopped. Brindley missed the conversion.

Shortly after the restart a good break by O’Donavon put Lee into space, Lee duly scored and Brindley converted to give Seapoint a 12 points to 7 lead. Trinity then came back at Seapoint forcing their way into the Seapoint 22, however Seapoint won an important penalty on their own line From the next lineout the Seapoint pack set up a solid maul gaining several yards. Brindley tested the opposition fullback with an up and under and when the fullback fumbled Brindley got his hands on the ball and had a clean line break. Brindley nearly went all the way but when tackled was able to offload to the hard working Sean Downing who was there to take the pass and score. Brindley converted.

After the restart another superb break by O’Donavon looked to have created a certain try with Forster on his shoulder. O’Donavon however opted to dummy, fooling everybody including himself as he ended up dropping the ball. Shortly afterwards Seapoint won possession from a scrum and the simplest of backline handling between Manning and Cassidy resulted in the latter scoring under the posts. Brindley converted to give Seapoint a commanding lead of 26 points to 7.

Immediately after the re-start Forster had a 40 yard break and found the ever present Sean Downing who almost scored but the referee adjudged him to have been held up over the line. From the drop kick restart Seapoint again created space with superb handling to create a second try for Alex Lee. Brindley surprisingly missed the conversion to leave the half time score at 31 points to 7.

After halftime things did not get any better for Trinity. A lineout steal in their own half (Hugh Ross) resulted in Downing making a 40 yard break of his own and then passing to Brindley who scored under the posts and duly converted. Shortly afterwards more good passing resulted in a second try for Forster leaving the score at 45 points to 7 after only 8 minutes of the second half. At this point Seapoint emptied the bench taking off Brindley, Forster and Lee.

Seapoint had no intention at letting up. A great break by Stephen Manning put Campbell in for a score. Whelan now playing outhalf converted. Shortly afterwards another break resulted in a try of his own for Manning. Whelan missed this conversion to leave the score at 57 points to 7. At this point the referee conferred with both coaching teams and it was agreed to blow up the match, a 50 point margin on the 60 minute mark being enough to settle the contest.

After an initial poor start for the first ten minutes Seapoint reasserted themselves as genuine contenders for the league. The pack was solid, Flannery, Campbell and Ross leading the charge. Forster was his mercurial best. The backline were assured as a unit, James Newman was exceptional. In particular, when left in some thankless situations in the early stages Newman used feet and speed to get himself out of trouble and turn poor possession into attack.

Man of the match award to Sean Downing who covered more ground than anybody, invariably popping up in the right place at the right time and was instrumental in several of the try’s scored  including one of his own. Now bad for a prop.

Three-week break now until the next match in early February. An away fixture to Corinthians in Cloonacauneen. A venue which has very few good memories for your’s truly. There are much better places to stop on the N-17.   Seapoint will need to be at their very best.