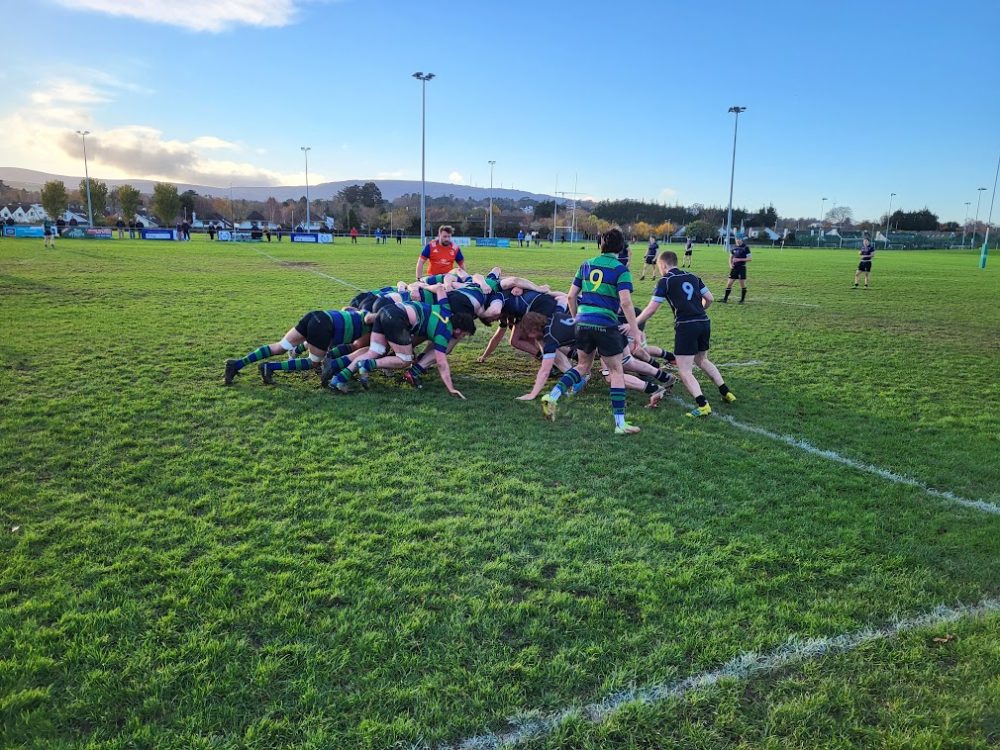 Seapoint were desperately unlucky not to record their first win of the season while delivering an excellent team performance. Leading by 17 to nil at half time, they looked to be in a commanding position even whilst playing into a stiff breeze in the second half. But some poor discipline early in the second half (2 yellow cards), and a couple of errors under pressure in the closing minutes resulted in a 20 points to 17 loss.

Seapoint playing with the wind at their backs in the first half started well and exerted lots of pressure. Hayden Hempsenstall was unlucky not to score after 5 minutes when he collected an overthrow from a Wanderers lineout on the 22 and made a superb break before being tackled into touch on the try line. Seapoint continued to exert pressure during the initial stages and were rewarded after 13 minutes when Sam Cassidy crashed over under the posts for the first score of the game. Manning converted to give the home side a 7 points to 0 lead.

The next ten minutes was all Wanderers as they exerted a lot of pressure from the restart and retained possession well. Seapoint defended with passion and the line held firm. Wanderers won a penalty on the 20 minute mark and went to the corner with a lineout 5 metres from the Seapoint line. A crooked throw let Seapoint off the hook and ultimately Cassidy relieved the pressure with an impressive line break. Seapoint now exerted some territorial pressure of their own and ultimately won a penalty on the half way line. Manning delivered a superb kick to the corner 10 metres out. His forwards returned the favour by setting up a perfect maul and driving over, Hempenstall getting the credit for the try. Manning duly converted to give Seapoint a 14 point lead.

From the restart Seapoint exited well but when Cassidy made another line break he suffered a bad knock in the tackle (whilst winning a penalty) and had to go off with a dead leg. Manning moved to 12, Oisin Horan came on at fullback and Abe Tormey Murphy slotted in at outhalf. Manning kicked the penalty. Wanderers exerted some territorial pressure for the remainder of the first half. But Seapoint defended well and got to half time with a 17 points to nil lead.

Wanderers started the second half with intent using the wind to gain good field position. Five minutes in they kicked a penalty for their first score of the game. 17 – 3. From the re-start Seapoint applied good pressure and Sam Lynch made a great break up the touchline and was awarded a penalty. Seapoint went to the corner and had a great opportunity to score from another driving maul, however the ball was turned over and Wanderers managed to clear their lines. With renewed belief Wanderers began to put some good handling moves together. Oisin Horan was yellow carded after 10 minutes following an altercation with an opposition player. Shortly afterwards Wanderers scored a converted try after a few minutes of sustained pressure. 17 – 10. The Seapoint restart failed to reach the requisite 10 metres and Seapoint were immediately under pressure again. Within minutes,  Conan Brady was also yellow carded and now Seapoint were down to 13 players. With composure and well organized defence, Seapoint managed to survive the yellow card periods without conceding another score. .

Once back up to 14, Josh Curran was introduced off the bench replacing Ed Sheehan who had put in a solid shift. A good line break up the touchline by Reynolds created a great scoring opportunity but a knock on the 5 metre line allowed Wanderers to clear their lines.  Seapoint continued to play ambitious rugby but a loose pass on the halfway line gave away an intercept and Wanderers displayed some great offloading to score in the corner. Their outhalf landing a difficult conversion to tie the scoreline at 17 apiece.

Seapoint played some excellent rugby in the closing 10 minutes and were unlucky not to cross the try-line on more than one occasion. Manning narrowly missed a difficult penalty into the wind with just 5 minutes left. The last few minutes was played in the Seapoint half. The game looked lost when Wanderers were awarded a kickable penalty with only minutes left, they missed but a poor clearance by Lynch and a high tackle by Horan combined to give the Wanderers outhalf second chance which he duly converted. Heartbreak for Seapoint; a game they didn’t deserve to lose and some hard lessons in terms of decision making and execution.

Hugely positive performance, and very entertaining game of rugby. Trinity away next week (Santry), game kicks off at 2:00 pm. All support welcome.