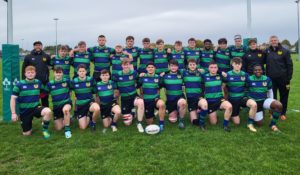 Seapoint had home advantage for the first game of the JP Fanagan league campaign against UCD on Sunday Oct. 16th. They failed however to turn first half possession and territory advantage into scores, and this came back to hurt them as UCD scored with the last play of the game to take all four 4 points.

Seapoint were playing with a light breeze at their backs in the first half, and quickly turned their superiority in the pack into territorial advantage as they dominated scrums and mauled efficiently from lineouts. The Seapoint pack set down a marker when they won the first scrum against the head. Second row Ed Sheehan came off after only 10 minutes (obviously not fully recovered from a flu earlier in the week) and was ably replaced by Conan Brady who made his presence felt immediately. For the first 20 minutes of the game all the pressure came from Seapoint. Callum Desmond at number 8 was making good line breaks and the front 5 fronted up well, with Harry O’Neill being especially prominent. Seapoint won penalties, went to the corner, set up some good driving mauls but unforced handling errors, poor decisions and bad discipline prevented them from converting these opportunities into points. Having weathered the storm for the first 30 minutes of the first half, UCD came back into the game for the last 10 and exerted some pressure of their own. Harry O’Neill was somewhat harshly yellow carded in the 35th minute for a high tackle. His pack team mates immediately responded by winning the next scrum against the head despite only having 7 in the pack. Shortly afterwards, Hempenstall made one of his trademark breaks down the wing and won a penalty on the 22. Manning converted to give Seapoint a narrow 3 nil lead at half time.

The second half was a display of huge courage and defensive effort by the Seapoint team. The wind had strengthened considerably so UCD had a significant advantage in the second half. Each turnover resulted in long 50 yard kicks deep into the Seapoint half and the effort and work started all over again. Despite this, the Seapoint defence held firm. Tendai Maruma had an immediate impact when he came on five minutes into the second half. Twenty minutes in, UCD won a penalty which they converted to tie up the score at 3 points apiece. The front five continued to work tirelessly with Reynolds and Brady being particularly prominent. In the backs Manning and Bolger held firm in the center and UCD never really looked like breaching the defense. However, as long as the game was this tight, there was always a danger of losing. In the closing minutes a kick deep into the Seapoint half and one missed tackle created the scoring opportunity. UCD take away a deserved victory at 10 points to 3, their defense held firm in the first half and they stayed in the fight up to the last minute. Heartbreak for Seapoint who worked tirelessly in the second half and held firm for 39 minutes only to lose at the death.

Lots of positives with a pack performance which bodes well for the future. Defensively we were excellent throughout. Better decision making, staying calm in the red zone and turning opportunities into scores will be required in the future to turn possession and territorial advantage into victories. We will learn from this defeat. Next up Corinthians arrive to Kilbogget next week and will be equally tough opposition. The home crowd turned out in numbers and provided great support, we will need them again next week. 3 pm kick off again next Sunday.