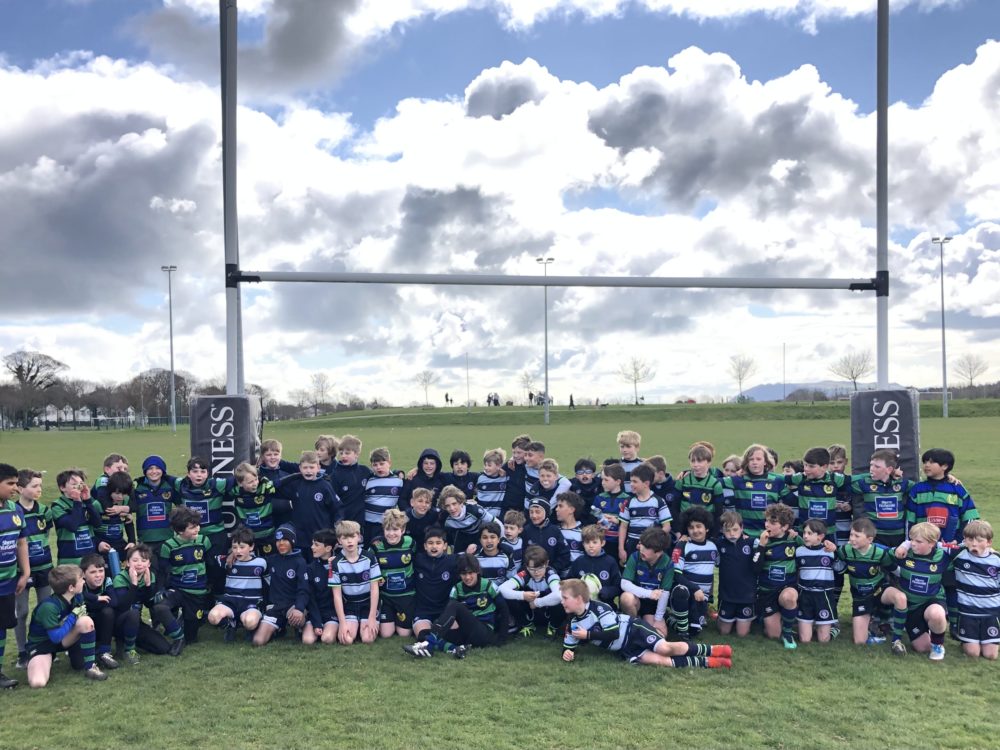 This year’s crop of Seapoint U11s have had a lot to contend with over the course of the 2021/22 rollercoaster of a season – seismic victories, agonising defeats, new faces, old injuries, selection headaches, Coach Gary’s on again/off again relationship with his beard…

So it was with a sense of excited anticipation that the 2011s prepared to kick off at the weekend, not just because it was a Saturday fixture for the first time ever, but the added bonus of it being their very first international against a touring side and with all important bragging rights at stake.

Adding to the excitement, the boys got the full-on matchday experience, including a pre-match pep talk in the shiny new dressing rooms and the opportunity to run out onto the pitch as flags waved and a record crowd formed a guard of honour, providing a thunderous applause as the teams took to the main pitch. A last-minute hiccup had Jedward signing both anthems at an empty Donhead School in London to the bemusement of the caretaker while the Garda traffic corps had to give up on getting President Higgins and his bicycle into the grounds of Kilbogget due to congestion (so I’m told).

The previous week’s fixture had given the boys food for thought and the team were keen to make amends. As KO approached, the noise and excitement spilling out from the home dressing rooms was palpable – win, lose or draw, this was an occasion to be savoured, much like the sugar-filled bounty that awaited the teams given the welcome return to post-match hospitality.

But you’ve got to earn those buns, and here’s how the morning panned out…

Team Blue suffered a late withdrawal when Oscar B, who’s growing influence has helped motivate the team, took a knock to the shoulder during the warm-up. He bravely stood himself down and took up the role as flag bearer, escorting his team onto the pitch. Another pre-match injury scare seemed on the cards when news began to filter through that a “band aid” was required for Sam B – exactly what good a Christmas No. 1 featuring Bono, Bob Geldof, Midge Ure, Simple Minds and others was going to do to cover a bad blister on his finger was anyone’s guess but luckily a plaster was found, enabling Sam to avoid the distractions of a sore finger and terrible jokes.

In Match 1, Seapoint showed much early promise, matching the physicality and tactical nous of a strong Donhead opposition who were keen to ruck and run. Some great carries by the Blue, Black and Green saw an early score with Amaury (complete with several opposition players hanging on to him for dear life) powering over the line in front of a delighted home crowd for Seapoint’s first score. But Donhead remained calm and set about playing their own game, encouraged by their own travelling support.

While more tries came from good carries/runs by the likes of Luke, Luca, Dylans H and O’M, Eoghan, Sam and others all contributing to helping the team over the gain line and try line at various stages, half time appeared to interrupt the flow and it seemed as if perhaps the occasion was getting to the boys just a little. The team began to lose some of their shape, being opened up by some missed tackles and were guilty of watching the man rather than the ball and throwing some challenging passes that coughed-up posession.

Match 2 gave the squad a much-needed chance to regroup and the team were bolstered by the Lazarus-like return of Oscar who was chomping at the bit to get on and help his team out – pumping his legs and running through many a Donhead player while keeping the ball alive when eventually stopped with excellent offloads. Dylan O’M tackled, tackled and tackled some more – defensively brilliant all day, he put pressure on Donhead making them spill the ball countless times and was hugely impressive in attack as well, running strong lines and off loading brilliantly.

The game again showed promising signs with some wonderful examples of what Seapoint were capable of when they put their minds to applying the simple basics and moving the ball quickly through the hands to launch an attack, delivering a wonderfully worked team try. But alas, in the face of a purple patch for Donhead who scored a few quick tries in succession, Seapoint again lost their shape and opted for Route One ball, a mistake that cost them possession as Donhead bossed the rucks and Seapoint just couldn’t release the quick ball that their backs craved.

Two defeats hurt the boys as they could see where the mistakes lay (Pass/Tackle/T.U.B.) as frustration crept in but lessons hopefully learned (Pass!!!/Tackle!!!/T.U.B.!!!) and the disappointment soon dissipated when the aroma of garden vegetable, dairy and protein products (i.e. cheese and onion crisps) wafted across the pitch. A special mention to Jake on making not just his Seapoint debut but also the fantastic rugby-pitch cake complete with posts!

Match 1 started off at a frantic pace with Donhead moving the ball from one wing to the other with Team Green defending strongly and the ball staying in play for nearly 3 minutes. Eventually our team cracked and Donhead got a deserved first score. Team Green bounced right back with a concerted effort of ‘keeping it alive’ with Bobby Cave crashing over the line to even things up. Donhead came back with good passing and use of space to go ahead again.  Team Green responded with a great team try with Captain Dexter pumping his legs to crash over to level things up in a thrilling first half. The second half was more of the same with great defence from both teams but Donhead scored a third and winning try with Team Green just falling short.

Match 2 – Team Green started off on fire with Ross O Donnell taking centre stage running in a hat trick of tries, the pick of them following a great offload from Bobby C and Ross scorching down the left touch line. Donhead came back into it with the help of a controversial try awarded after Dexter felled a Donhead ‘boy’ (who was ‘two heads and shoulders’ above anyone else) short of the line but the try stood. Seapoint showed great determination with Dexter leading his team with tackles & jackals, Tom Q contributed excellent restarts and overall distribution but the team eventually ran out of steam to be pipped 4-3.

Don’t let the scoreboard fool you – while the visitors may have scored more tries on the day, a series of losing bonus points were up for grabs (though not necessarily advertised) and Seapoint ground out a draw with a fine display of pre-, intra- and post-match singing/cheering and rounded it all off with an impressive display of counter-rucking and mauling once the nod to eat the post-match goodies was given.

All in all, a fantastic experience for those involved – while a win would have been the icing the cake, the fact that there was a cake already iced helped soften the blow (thanks again to Jake the Bake and his culinary assistants!).

It was a series of firsts for the boys, coaches and supporters and the kind of memorable occasion that will hopefully stick with them for years to come. The season’s not done yet and many’s a boy still owe us many’s a tackle and defensive line so we’ll get back to work on that this week but for now, well done to all involved, on and off the pitch, wishing a speedy recovery to all those  players, coaches and parents on the sick and injured  list, and here’s looking forwards to the next challenge on the horizon as well as the upcoming Seapoint Blitz on 29 April – if you haven’t already volunteered, what are you waiting for?!