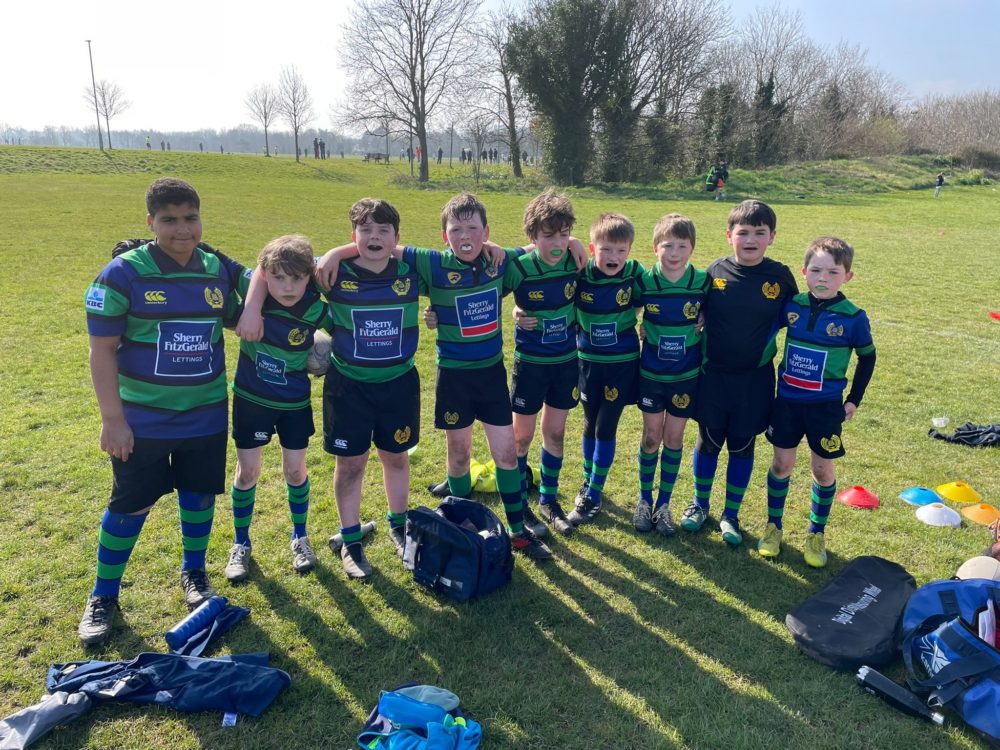 “Spring forward/ Fall back” is the mantra to remember which way the clocks go when they change twice a year. Stretching the chronological analogy, it appeared that as Lansdowne sprung forward, Seapoint fell back as a leaky defence cost the 2011s dearly.

The last encounter against Lansdowne from memory was in early 2020, just as news began to spread about a certain virus finding its way to Europe. Fast forward two years and both sides were ready and raring to go on a beautiful morning that bode well for good running rugby.

However, it seems the visitors had adjusted better to the loss of the hour in bed that morning and were quickest out of the traps. An early onslaught in all games caught Seapoint unawares and had them on the backfoot, a position from which it was always going to be difficult to recover against a well organised opposition.

Watching through the fingers didn’t lend itself to many photos being taken, something which may save some blushes when it comes to analysis of those who missed their tackles, threw some wild passes, or found themselves isolated in the wrong place at the wrong time.

Like France v Ireland in February (depending on which side of the couch you were watching from), the early exchanges didn’t always make for pleasant viewing but in fairness to the Seapoint teams, they eventually managed to regroup and stage a rally to restore a level of pride and belief as the morning’s proceedings evolved.

Team Blue came away battle hardened after a tough day against an organised Lansdowne squad. Often impressing in attack, the boys rued the concentration lapses and defensive gaps that let in several soft tries, the offering of space just too much for a hungrier Lansdowne team to resist. The gameplan of TUB/Tackle/Pass regrettably fell by the wayside as the opening match proved the hardest of the lot.

Some soul searching in the halftime huddle helped stem the tide and the tries eventually came in Game 2 with some great individual efforts but also the try of the day – a wonderful play involving most of the team as they threaded the ball up the pitch from inside their own “22” – this reminded them of their skill and ability and rekindled the passion and confidence that had taken a hard knock after the first game.

Luca was the standout player across the three matches, some great takes and offloading, tackling everything that moved, and rucking like a bulldozer – his near 20metre driving back of a Lansdowne attacker being one of the highlights of the morning! Sam was next in the tackling stats chasing down any Lansdowne player near him – that he was sweaty and red-faced gave an indication of his work rate, not his fitness, even when he was found on the wing when he was supposed to be in a scrum will be forgiven on this occasion ;-). Oscar really stepped up as pack-leader, using his voice, physicality and leading by example, while Luke, Rory and Amaury worked especially hard all day despite taking some tough hits.

Like Andy Farrell’s tenure in charge of Ireland, Team Black took a game or two to find their groove but when they did, the rugby was outstanding – fast ball, offloading, great support lines and a real team effort that was celebrated with a try of the day by Eoghan Collins at the end of the 3rd game. While the defence improved, there is plenty to work on, with tackling and alignment being key.

A particular mention for Matthew Bridgeman, making tackles, keeping the ball alive, taking kick offs. Eoghan Collins who corrected his teams lateral running on a couple of occasions and took the ball hard up the middle, punching holes and creating a great platform for his team. Tom Quinn, Bobby Cave and Charlie Hughes ran hard, always looked for the offload and tackled well. Finally where would we be without our weekly bone crunching tackle from Mr D Sweeney? He saved them (2 in a minute) for the final game, a real confidence killer for Lansdowne and which allowed Seapoint to set up another attack and score off it.

Like Teams Blue and Black, Team Green would agree that they too struggled on the day but did manage to improve during the games. Similar to Team Blue where concentration lapses or loss of focus resulted in opposition turnovers and tries, some players forgot their lines more than once, be it in attack or defence, which caused avoidable problems against a cohesive and well-drilled Lansdowne side. However, it wasn’t all doom and gloom and there were encouraging performances, particularly in Game 3 when Team Green were unlucky with a few bounces of the ball but they showed some real fight in defence.

Stand out performers of the day were Sean C who kept tackling right to the end. Oscar C showed great leadership in Game 2 making some big carries and lifting his teammates. Ross O & Dylan tackled and carried well but unfortunately got isolated on occasions and the tries didn’t come. Tough day at the office but good spirit shown!

So following which was arguably their toughest assignment so far, another chapter closes on the 2011s 2021/22 Season. The boys will know that a team effort requires 100% from all, 100% of the time, and some will be disappointed with individual or collective performances. But while not wanting to be accused of “loser talk”, good teams bounce back and learn more by losing than they do by winning and all the boys will know where they need to up their game.

With plenty of wins under the belt this season, Sunday’s losses were a timely reminder that showed when the basics are done right, they’re very effective, whether you’re attacking or defending. We look forward to working on that in training on Wednesday as we dust ourselves down and prepare for an historic Saturday fixture against Donhead School from England and an opportunity to get the show back on the road.