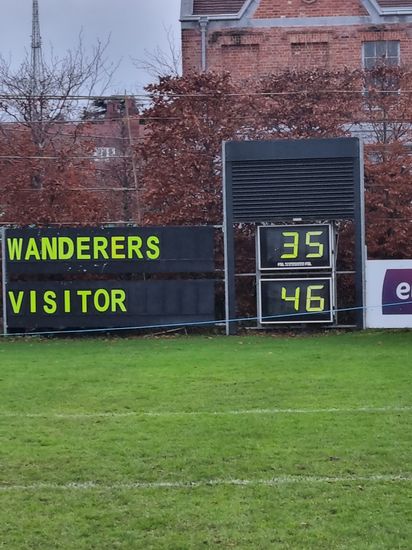 Joie de Vivre is defined as the exuberant enjoyment of life. The Seapoint U-20’s embrace all of life’s opportunities with exuberance but none more so than when on a rugby pitch. The carefree abandon, ambition and clinical execution with which they approached this game was worthy of the halcyon days of O’Driscoll, D’Arcy and Horgan. They had beaten Wanderers at home earlier in the season, but it had taken a last gasp try to do so. Seapoint arrived in Merrion Road for the return fixture knowing that it would be a battle.

The opening exchanges were full-on. Seapoint started with a strong breeze and the sun at their backs. Three minutes into the game Hammond got into a strong poach position winning a penalty for Brindley to knock over from just outside the 22. Shortly afterwards in his own 22 Hammond tried to repeat the trick, this time the referee pinged him and Seapoint were lucky when the Wanderers out half missed a straightforward penalty. Wanderers were applying continual pressure and when Hempenstall failed to deal with an overthrow on his own 5 yards line, the Wanderers pack drove over after successive pick and go’s. An easy conversion left Seapoint trailing by 7 points to 3. A few minutes later, Seapoint lost two of the three starting front row forwards with Hempenstall and Hammond being replaced by Downing and Bourke.

Seapoint immediately applied pressure from the restart and some fast ruck ball created a two on two situation out wide with Forster attacking the space. Forster drew the winger and released Cassidy who romped over. Brindley converted to leave the score at 10 points to 7 with twenty minutes gone. After the water break, Wanderers got a penalty and went to the same corner where they had scored their first try. A clean take in the middle of the lineout allowed them to set up a strong maul and following a few surges their Number 8 again managed to score. Wanderers got the conversion and Seapoint trailed by 14 points to 10.

With about 10 minutes to go in the first half Seapoint threw off the shackles and began to play with abandon. Fast hard direct running into contact and free flowing offloads were the order of the day. Successive line breaks by Campbell and Forster came close. Ultimately the pressure paid and from a tap and go penalty Forster forced his way over the line. Brindley converted and Seapoint regained the lead at 17 14. Forster nearly scored again shortly afterwards when successive offloads and superlative handling left him 5 yards out, unfortunately the last pass didn’t go to hand. Just before half time Downing broke through and offloaded to Flannery who scored. Another successful conversion left Seapoint with a 10 point lead at half time as they turned to face into the sun and the wind.

The first 20 minutes of the second half was all Seapoint. Early in the half O’Donovan came on for Campbell. Another strong carry from Forster released Eivers who scored under the posts. An easy conversion left a 31 to 14 score line. Whelan came on for Manning with Cassidy moving back into his more favoured centre position. Shortly afterwards a break by Lee released Downing who scored another . Surprisingly Brindley missed the conversion (his first miss from 6 kicks) and was immediately substituted by the coaching team (harsh). 36 point to 14.

At this stage the coaching team emptied the bench with Herrera on for Horan and Drohan on for Brindley. This didn’t stop the juggernaut as the tempo stayed fast and the offloads kept coming. Lee eventually scoring another. Horan took his first and only kicking attempt converting the try with what can only be described as a bad hook in golfing parlance. No one is sure how it got over, but it was ably assisted by both the post and the cross bar. This left the score at 43 points to 14. No one was really that worried when Wanderers scored a second try just before the second half water break to leave the score at 43 points to 21.

However, things got a little more serious when Wanderers scored another two unanswered tries in the next 10 minutes. Their kicker was knocking over conversions for fun and an unanswered 14 points meant the margin was now only 8 points. Thankfully the coaching team put Brindley back on for Whelan to steady the ship and Seapoint won a penalty. Brindley calmly knocked it over to leave the score at 46 points to 35 with about 7 minutes left. This was the final score as Seapoint now defended resolutely, fighting for every inch, and preventing Wanderers from scoring again. A hard fought contest where Seapoint exhibited courage, huge ambition, skill, and joie de vivre.

No shortage of candidates for man of the match. The pack all worked hard, Ross exhibiting no issues with his move to second row, Flannery tireless and Downing putting his hand up strongly for a starting position. Campbell made a huge impact throughout the 50 minutes he was on the pitch. The backline marshaled by Brindley were magical and Brindley’s kicking from hand was superb. Once again Forster was the difference, strength speed and athleticism matched by his superb decision making with ball in hand and his ability to create space for all around him gets him Man of the Match. Well done Captain Liam.
A well-earned rest for the next few weeks. Next up there is a huge game early in the New Year January 9th as we welcome league frontrunners Barnhall MU to Kilbogget. We need all the support we can get and a sporting and entertaining contest is guaranteed.