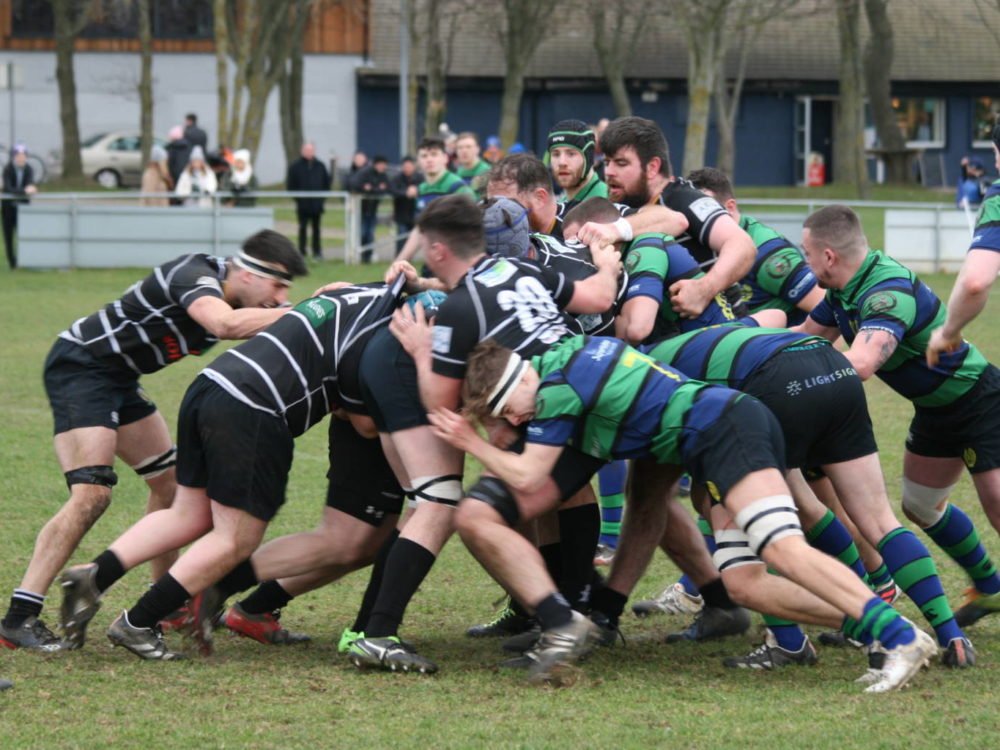 After an extended 6 week break over Christmas our 1st XV saw out a nail-biting 19-17 win over Kilkenny in their Leinster League Division1A fixture at Kilbogget Park on Saturday. Unfortunately with Bective Rangers & Monkstown securing bonus point victories we did however lose some ground on our nearest rivals.

Playing into the clubhouse we got off to a flying start as the Kilkenny try line was bombarded, despite the referee awarding a number of penalties for offside infringements that was as far as the sanctions went with the visitors repelling our best efforts and then getting relief with a goal line drop-out. The remainder of the first quarter was played out between the respective 22s with Seapoint looking the more likely to score with the Kilkenny defence being forced to work much harder.

In fact it took until the 30th minute for the deadlock to be broken with the hosts pressure eventually seeing Marty Kerr burst through the midfield defence from the halfway line creating a 2-on-1 with the Kilkenny fullback, an opportunity that wasn’t spurned as Kerr timed his pas to the supporting Dave O’Reilly to perfection. Darragh Mullins coolly landed the conversion on his welcome return to the fold after a 3 month injury absence.

This score seemed to rattle Kilkenny and within 5 minutes we had our second try as excellent ball retention through multiple phases created space out wide for wing Eddie Weaver to touch down in the corner, the conversion proving too difficult. This proved to be the final score of the half, the 12-0 lead looking like a poor return for the effort invested.
The 2nd half got off to the perfect start with U20s Captain, Liam Forster, making a scintillating 50m run to put the Kilkenny defence on the back foot, some quick recycling and another cameo from Forster enabled Harry Byrne to dot down under the posts. Mullins added the extras as the referee also sent the Kilkenny No. 6 to the bin for cynically preventing an earlier opportunity for the score. With the lead extended to 19-0 and still some 38 minutes to go there was cause for optimism that the bonus point try wouldn’t be long in coming.

Unfortunately that’s not how the remainder of the game played out as we struggled to capitalise on the numerical advantage we had, turning over possession at critical moments. Once Kilkenny were returned to full strength they upped their game and had us under enormous pressure, so much so that our efforts to deny them quick ball saw our Skipper, Brian Lyons, sent to the bin. From the resulting penalty the visitors took full advantage of our reduced numbers to send their winger into the corner to close the deficit to 19-5.

We managed to recover from this setback but were still unable to threaten the Kilkenny try line and just as were back to 15 on the field we lost another man to the bin, this time Mullins being harshly adjudged to have deliberately knocked on the ball. With 10 minutes remaining Kilkenny took control and with our scrambling defence getting too narrow they spread the ball wide to outflank us for a well executed try, the challenging conversion attempt being struck beautifully to take the score to 19-12.

At this stage the Seapoint faithful were getting very jittery. The Kilkenny tails were up and they could sense an opportunity to end our league title hopes as we entered the final minutes and sure enough their dominance led to another try and with it an eerie silence descended on Kilbogget Park. The conversion looked to be relatively straightforward based on the kickers earlier efforts but the pressure got to him as the kick sailed well wide to the right of the posts with the Seapoint support breathing a huge sigh of relief.
While the game did restart and we started to build a bit of pressure, a knock-on brought an end to proceedings. While we didn’t get as much out of this game as we would have liked it could have been a lot worse and we remain firmly in the hunt as we prepare for a trip to Dundalk next weekend