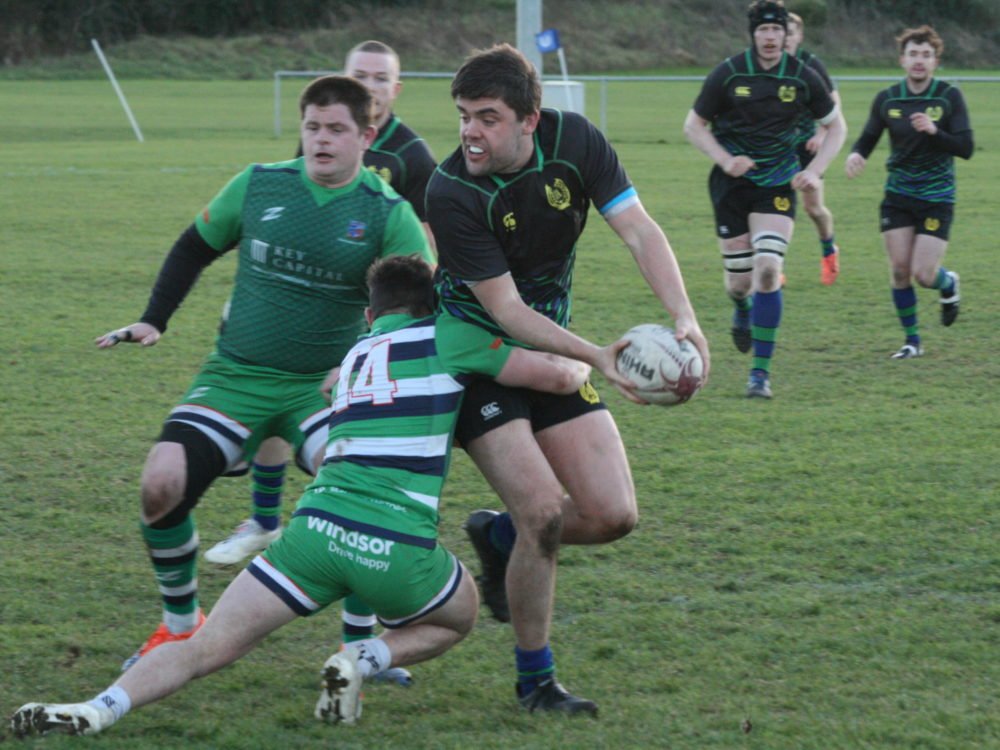 Our Ist XV returned to winning ways with a 38 – 5 bonus point win over Suttonians at Kilbogget Park on Saturday, and with Monkstown losing their unbeaten record at the hands of Bective Rangers we also took over at the top of the Leinster League.
With a strong wind at our backs, playing into the clubhouse end, we had our visitors on the back foot from the off although they did manage to keep us at bay until the 8th minute when Dave O’Reilly made an incisive run through their retreating defence to touch down to the left of the posts, Matt McKenna adding the extras for a 7-0 lead. Unfortunately we lost prop Brian Duggan to a nasty head cut which saw Harry Byrne enter the fray earlier than would have been expected.
The pressure continued throughout the first quarter with the referee showing a great deal of patience for the repeated infringements of Suttonians. On 20 minutes we chose to take the penalty points on offer as McKenna landed from the 22 to stretch the advantage to 10-0.
At this point Suttonians started to enjoy a long period of possession but their progress into scoring territory was slow as the home defence flexed its muscles to restrict them. Their first scoring opportunity came on 30 minutes with a kickable penalty despite the wind, but inexplicably they declined for a scrum from which they subsequently turned over the ball. They were sent trundling back into their half as Seapoint looked to extract the full value offered by the conditions. While we kept Suttonians pinned inside their 22 we couldn’t make it count and as halftime loomed the home support were getting uneasy. Bravely our Captain, Brian Lyons, turned down an easy penalty opportunity for a scrum 10m out and thankfully this decision paid off as first Marty Kerr made good ground before scrum-half Stevie Carroll burst over, McKenna again adding the extras for a 17-0 lead at the break.
The early exchanges of the 2nd half would be critical as an early score for Suttonians would offer them great encouragement. Our visitors knew that too and had us on the back foot in the early minutes with our defence again being tested but holding firm. When we did manage to gain some possession we progressed with great purpose, our forwards, with Zac Jungmann & Marty Kerr prominent, gradually pushing Suttonians into their own half.
On 50 minutes a breakdown penalty enabled us to secure a line out on the opposition 22 with the resulting strike play enabling Dave O’Reilly to scythe through the bewildered Suttonians midfield to ground under the posts. McKenna made no mistake with the conversion, the 24-0 score line palpably bringing a sense of relief to the home support.
Suttonians didn’t put the head down and having enjoyed a period of continued possession deep in our half they eventually found a way through the resolute defence to reduce the deficit to 24-5 as we headed into the final quarter. They continued to dominate possession & territory but were becoming increasingly frustrated by the relentlessness of the Seapoint rear-guard.
On 70 minutes we managed to retain possession from our own 22 and following a number of powerful carries from backs & forwards, with Zac Jungmann again prominent, Eoghan O’Reilly was set free to jink his way around the scrambling defence to secure the try bonus point, with McKenna continuing his good form off the tee.
It looked like the game would taper out quietly from here but the best was yet to come. Suttonians looked to pin us back with some deep open field kicks, one of which found the arms of fullback Eoghan O’Reilly on the 22. O’Reilly set-off on a mesmerising 70m run that left players grasping at thin air as he weaved and jinked his way up the field for what has to be one of the finest tries ever witnessed at Kilbogget Park. McKenna signed-off with a perfect 6 from 6 and very shortly after the referee brought the game to a conclusion.
There was even better news for us when we returned to the clubhouse as news filtered through that Monkstown had succumbed to Bective Rangers, leaving us as league leaders and setting-up a mouth-watering encounter in Donnybrook to bring the curtain down on 2021. Hope to see a big show of strength from the Seapoint faithful as the league campaign hots up