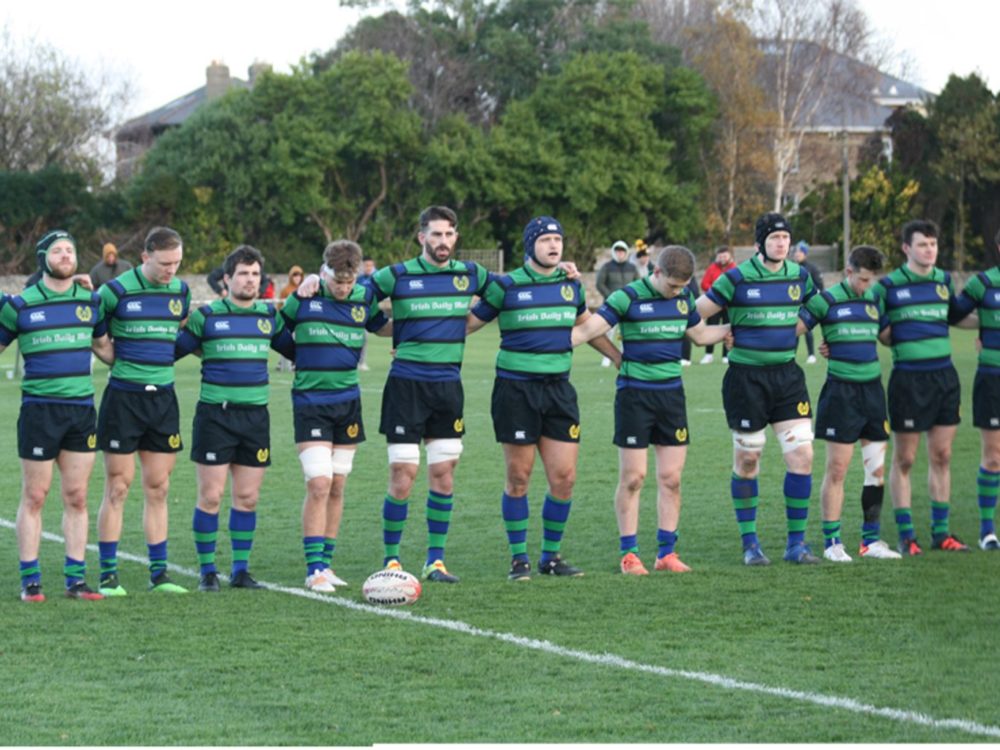 Our 1st XVs unbeaten league run came to an end at Sydney Parade on Saturday as the top of the table clash saw Monkstown prevail 22-10.
On a crisp afternoon the strong attendance from both clubs were treated to a very physical battle that only served up two tries, a testament to the quality of both defences. In fact it took 20 minutes before either side created a clear scoring chance with Monkstown dominating territory but unable to make any headway due to the physicality that we were bringing to the early exchanges.
Our first foray into the Monkstown 22 came from a fine 50:22 from Cian Buckley and from the resulting line out we were rewarded with a penalty in front of the posts that Matt McKenna coolly slotted for a 0-3 lead. Unfortunately we were unable to deal with the subsequent restart and conceded a penalty ourselves from just outside the 22 that the Monkstown 10 landed with ease, a sign of things to come from his boot throughout the afternoon.
Monkstown continued to dominate territory without looking like making any threatening breakthroughs but on 30 minutes a hesitation in our midfield defence saw them saunter under the posts to take an unlikely 10-3 lead. Things were to get worse before halftime as a scrum infringement handed the Monkstown 10 another opportunity from 35m out which he stroked over with ease. While it didn’t feel like we had done much wrong Monkstown had extracted full value for any advantage they had to take a 13-3 lead into the break.
While the 2nd half saw us start well we struggled to stretch the hosts defence as they managed to keep us at arms length, slowing the game down and frustrating our efforts to raise the pace of the game. On 55 minutes we offered up a penalty on the half way and yet again the Monkstown 10 made us pay with a fine strike. At 16-3 down we had an uphill battle and from the restart we were unable to make any impression as Monkstown sensed an opportunity to put the game to bed, an offside penalty 40m out was again converted with our deficit widening to 19-3.
As we headed into the final quarter there was optimism our fitness would stress the home defence but frustratingly the hosts took every opportunity to interrupt any momentum we had. With 10 minutes remaining Monkstown extracted another penalty from a scrum for their 10 to continue his perfect day from the tee and stretch the lead to 22-3.
Rather than let our heads drop we came back at them with our continuity and pace belatedly breaching the home defence through Dave O’Reilly, with McKenna adding the extras. While there was an expectation that the referee would play a few further minutes to reflect the number of extended injury breaks during the half, that wasn’t the case and we were denied the opportunity to chase down a losing bonus point.
While this was a difficult day against a very strong side we have to park it and move on as we face into two further challenging encounters before the Christmas break. On Saturday we welcome Suttonians to Kilbogget Park and look forward to the Seapoint faithful pushing us on as they have throughout the season to date.Seapoint Squad v. Monkstown 27 Nov 21
15 E. Weaver 14 D. O’Reilly 13 G. Hughes 12 M. McKenna 11 E. O’Reilly 10 C. Buckley 9 S. Carroll 8 M. Kerr 7 Z. Jungmann 6 D. Montayne 5 M. McCoy 4. S. Grannell 3 B. Duggan 2 C. Cunningham 1 B. Lyons (Capt.)
Reps: 16 H. Byrne 17 R. Mouatt 18 Z. Macaulay 19 D. Burke 20 J. Farrell